In the first decade of the Georgian Era, bell shaped skirts were all the rage. This silhouette was accomplished with hoops of whalebone tied together in a cage around the waist. By mid-18th Century, oblong or fan hoops called panniers (French for basket) spread a lady's skirt to the sides. Proponents claimed this style made for ease of walking and kept importunate gentlemen at a distance. As always, however, such fashion came at a price. Women were forced to turn sideways when they passed through doors, and climbing into a coach was a logistical nightmare. So in the last quarter of the century, the emphasis shifted from the hips to the rump.
Pads filled with fabric or cork were tied at the waist and draped over the derrière, poufing the skirt in the back. Cartoonist were quick to lambast this new “bum roll” or “cork rump” trend. (Check out the 1787 print by S.F. Fores called The Milliner's Shop above. A bum roll is hanging on the wall to the right of the mirror.)
Typical of the ridicule was the print by Matthew Darly from 1777 entitled Chloe's Cushion or The Cork Rump. (Notice the puppy perched on the back!) Satirists like Peter Pindar composed poems about the style. In 1815 he published The Cork Rump, or Queen and Maids of Honour. He'd already offered a backhanded criticism of the fashion when he extolled the virtues of the common maid in his 1794 poem, The Louisad:

“With Nature's hips, she sighs not for cork rumps,
“And scorns the pride of pinching stays and jumps;
“But, pleas'd from whalebone prisons to escape,
“She trusts to simple nature for a shape…”


Cork rumps were a popular subject in newspapers and broadsheets as well. One gentleman observed in the December 16, 1776 issue of The Weekly Miscellany:

“A most ingenious author has made it a question, whether a man marrying a woman…may not lawfully sue for divorce on the grounds that she is not the same person? What with the enormous false head-dress--painting--and this newfangled cork substitute--it would be almost impossible for a man to know his bride the morning of his nuptials. If the ladies look on this invention as an ornament to their symmetry, I will engage they shall be excelled by almost any Dutch market-woman or fat landlady in this kingdom.”


There is an account in History of the Westminster Election of a riot on May 10, 1784 in Covent Garden between proponents of the three candidates standing for Parliament. The Guards were called and subsequently fired upon the crowd. Two ladies lost portions of their wigs, several were “deprived of their eye-brows” and one woman had her cork rump shot off.
But perhaps no story was more outrageous than the one which appeared on October 4, 1785 in The Morning Post. A lady reportedly fell into the Thames and was saved from drowning by--you guessed it--her cork rump. (Click here for the entire article: http://chasbaz.posterous.com/the-cork-rump-as-a-life-preserver
Eventually, the cork rump faded in popularity, replaced by the Grecian silhouette and empire gowns of the Regency. But as the saying goes, you can't keep a good thing down. The exaggerated tush returned mid-19th Century in the form of the Victorian bustle.
Joanna Waugh lives on the southern shore of Lake Michigan and writes Regency romance. 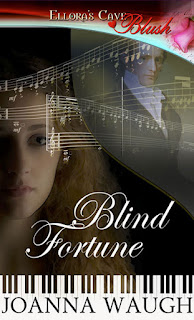 Her book BLIND FORTUNE is available in Kindle format at http://goo.gl/3HEpB

Some of my favorites